Barcelona is the capital and the most populous city of the Autonomous Community of Catalonia and the second largest city in Spain, after Madrid, with a population of 1,621,537.

Barcelona is recognised as a Global City due to its importance in finance, commerce, media, entertainment, arts, international trade, education and tourism. Indeed, it is a major economic centre and a growing financial centre (Diagonal Mar area); one of Europe’s principal Mediterranean ports can be found here as well as Barcelona international airport, which handles about 30 million passengers per year. It also boasts an extensive motorway network and is a hub of high-speed rail, particularly that which will link France with Spain and later Portugal. Barcelona was the 12th-most-visited city in the world and 4th most visited in Europe after London, Paris and Rome. It is in addition the most popular tourist destination in Spain. Barcelona is the 15th most livable city in the World according to lifestyle magazine Monocle.

Founded as a Roman city, Barcelona became the capital of the Counts of Barcelona. After merging with the Kingdom of Aragon, it became one of the most important cities of the Crown of Aragon. Besieged several times during its history, Barcelona is today an important cultural centre and a major tourist destination and has a rich cultural heritage. Particularly renowned are architectural works of Antoni Gaudí and Lluís Domènech i Montaner that have been designated UNESCO World Heritage Sites. The city is well known in recent times for the 1992 Summer Olympics. The headquarters of the Union for the Mediterranean are located in Barcelona.

The city has many venues for live music and theatre, including the world-renowned Gran Teatre del Liceu opera theater and the Palau de la Música Catalana concert hall.

Barcelona is almost as lively at night as it is during the day and it has a unique, exciting atmosphere, which provides the visitor with a truly unforgettable experience. 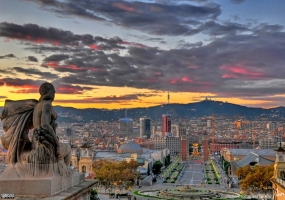 Spain is a member of the European Union (EU). In 2002 the euro was implemented as the common currency for most EU member countries.

Bank opening hours in Spain are Monday to Friday from 9am to 2pm.

Tipping in Barcelona is not expected unlike in other countries. If you choose to leave a tip, it can range between 7% to 10%.

Check out the Information for Foreigner’s Page of the Spanish Ministry of Foreign Affairs for more information.

Although Barcelona is a fast-paced city, mealtimes, especially lunchtime, are still respected, with the whole city shifting into low gear between the hours of 2 and 4pm. Many people either head home or crowd into a local eatery for a three-course menú del día (lunch of the day).

In Barcelona, the mainstay diet is typically Mediterranean, with an abundance of fish, legumes, and vegetables, the latter often served simply boiled with a drizzle of olive oil. Another local characteristic is the lack of tapas bars. Very good ones do exist but not in the same abundance as in the rest of Spain. Instead Catalans tend to go for raciones (plates of cheese, pâtés, and cured meats) if they want something to pick at.

The options for city travel include metro, bus, and tram. Each has its own benefits and are a very inexpensive way to see the city. TMB is the transportation company and their website provides route information that allows you to search by zip codes, from where you are starting or where you want to go.

Barcelona has an excellent subway system that covers just about all of the metro area. Almost all of stations are clean, well lit and easy to access. Metro stops generally have two entrances which will help you to know which direction to head when exiting the train to avoid having to backtrack.

There are various types of passes including multi trips that can be purchased from a vending machine in the stations or at ticket offices. Prices are reasonable and buying a multi trip pass offers about a 50% savings over single tickets.

The T10 (10 single trips) cards can be used by multiple persons – just leave your card for the next person. This counts as another trip of course. A ‘single trip’ means you can get on/off any public transport within the 1hr 15mins timeframe within your selected zone. In metro/train stations, enter gate turnstiles from the right (card goes on the left) but enter the sliding glass doors from the left (card goes on the right).

million visitors a year, so expect long queues to get inside. A good tip is to buy skip-the-line tickets in advance. This unfinished basilica is one of the
most famous buildings in the world and a top must-see sight in Barcelona. It was designed by famous Catalan architect Antoni Gaudi over 100 years ago and the foundation stone was laid in 1882, when the surrounding area was just fields. The splendid Sagrada Familia interior was opened to the public in 2012. The plan is to complete the Sagrada Familia church in 2026 to celebrate the 100th anniversary of Gaudi’s death in 1926. When finished it will be 144 years since construction began.

2. The Font Mágica Fountain: It really does feel magic to experience the beautiful show of water, light and music at The Magic Fountain which was built in 1929 as one of the main attractions for the Barcelona World Fair. The Font Magica is still one of the most famous spots in Barcelona with an estimated 2.5 million visitors annually. There are water and light shows in the summer from Thursday to Sunday and admission is free. Please note that sometimes due to exhibitions and events access to the fountain can be closed. Visit the Magic Fountain by metro to station Espanya.

3. Picasso Museum Barcelona: The world’s most famous painter Pablo Picasso was born in Malaga, but lived in Barcelona with his family from 1895 to 1904. Picasso’s father was an art teacher. It was here he spent his formative years as an artist. The young Pablo Picasso had already started his art studies in Malaga, but Barcelona was a huge influence on his early years as a struggling painter. Picasso first exhibited his work in Barcelona and considered himself from Barcelona. The Picasso Museum in Barcelona does not have the most famous Picasso paintings, but the collection is unique with early sketches and lesser known Picasso’s, which explain and show his development as an artist. The museum is located in various magnificent gothic mansions in the medieval part of Barcelona called El Born. Visit the Picasso Musuem by metro to station Jaume I and then 10 mins walk.

4. Las Ramblas Street: The Spanish poet Federico García Lorca said about La Rambla, “It is the only street in the world which I wish would never end.” La Rambla starts at Plaza Catalunya and ends at the Monument of Columbus at the Port Vell harbour of Barcelona. La Rambla it is not a spectacular sight, but very pleasant to stroll down and enjoy the human heartbeat of Barcelona. If you have not strolled down it, you cannot say you have been in Barcelona. It is also called Las Ramblas as it is really a collection of various stretches of street with different names. During the day and early evening it is completely safe and free to visit, however, be careful of pickpockets.

5. FC Barcelona museum & Camp Nou stadium: If you can see Barça play a home match, then that is the best Camp Nou experience but the museum is worth a visit. Camp Nou has the one of the largest Nike stores in Europe packed with Barça merchandise. Unmissable for football fans.

6. Barrio Gotico quarter: The Barrio Gotico gothic quarter is the medieval city of Barcelona from the middle ages. It grew around the old Roman town of Barcino which is the oldest part of Barcelona. The gothic part of the city has many beautiful churches, plazas, markets and museums and you can see parts of the old Roman walls. If you visit the Barcelona history museum – Museu d’Història de la Ciutat – you can see remains of Roman houses and streets of Barcino in Roman times under the museum. The gothic quarter is free to visit and best seen on foot because tour buses cannot get through the narrow streets. There are no dangerous areas in the Gothic quarter, but be aware of Barcelona pickpockets. Also worth visiting is the neighboring medieval area of Barcelona’s old city called El Born.

7. Modernist Park Guell by Gaudi: Parc Guell by Antoni Gaudi is a UNESCO World Heritage Site and is considered to be one of Gaudi’s most artistic works. The park is on Carmel hill so seeing this attraction means quite a long and uphill walk if you take the hop-on-hop-off bus or metro station Vallcarca. If you prefer not to walk, then take a taxi to the Park Guell front gate. The original idea of Park Guell was to build a private and exclusive residential garden village with 60 houses. This business idea didn’t work and in 1923 the park was donated to Barcelona´s city council as a public park.

8. Modernist buildings: Modernisme was a Catalan cultural movement centred in Barcelona and Catalonia from 1888 to 1911. It is most famous for its architectural expression, in particular the many works of Antoni Gaudí. There are a handful of modernist buildings in Barcelona that are outstanding. Three of them are in the one Barcelona city block called the “Illa de la Discòrdia” – the “Block of Discord” on the street Passeig de Gracia. They are “Casa Amatller” designed by Josep Puig i Cadafalch, the magical “Casa Batlló” by Antoni Gaudi and the “Casa Lleó-Morera.” A little further up the street on the opposite side of Passeig de Gracia is one of Gaudi’s most famous buildings in Barcelona named “Casa Mila” – and nicknamed “La Pedrera” (the Quarry). In the summer months you can enjoy rooftop terrace jazz concerta at La Pedrera. At Casa Batllo you can tour the building and also enjoy summer concerts in the modernist courtyard. Another modernist treasure is the beautiful Palau Guell town house near Las Ramblas, also by Antoni Gaudi. For modernist art and furniture visit to the Barcelona Modernist museum. A popular way to see top modernist buildings is on foot on Passeig de Gracia or by taking hop-on-hop-off tourist buses. Nearest Metro stations are Passeig de Gracia or Diagonal

9. Montjuic Hill and Poble Espanyol Spanish village: Montjuic Hill has many parks and attractions including an old fort at the very top called Montjuic Castle, which has a rich and dark history and fantastic views of Barcelona. The other big attraction on Montjuic hill is a unique Spanish village called Poble Espanyol which was built in 1929 for the Barcelona 1929 World Fair and Universal Exposition. The Poble Espanyol village was an architectural experiment to create a village, which would represent all of Spain’s different styles of architecture. Due to popular demand it was left intact after the exhibition and now houses a wide variety of cafés, summer open air night clubs, restaurants, over 40 superb handicraft shops and a great program of concerts and events. Poble Espanyol was designed by Catalan architect Josep Puig i Cadafalch.

10. Tibidabo Hill: A visit to Tibadabo is a fun thing to do in Barcelona and great for kids. The views of Barcelona are fantastic and there is a small and fun vintage amusement park at the top, which is open in the summer from March to September. You can reach the top of Tibadabo via a vintage Blue Tram which connects to a mountain railway, or take the bus from the Plaza Catalunya directly to Tibidabo. The fun-fair is closed in winter, open at weekends in spring and autumn and generally open from Wednesday to Sunday in summer, but check before visiting. The Skywalk where you can enjoy views of Barcelona is free and open all year except a few weeks in February for annual maintenance. The Sagrat Cor church at the top of Tibidabo is open all day and is free to visit.